skip to main | skip to sidebar

IAF to get second AWACS in March 2010

IAF is all set to enhance its strategic capability with the arrival of second Airborne Warning and Control System (AWACS), also known as eye-in-the-sky, in March reports news agency IANS.

The induction of AWACS, mounted on a Russian Ilyushin-76 airframe, will look deep into our neighbouring countries and detect incoming missiles and aircraft from hundreds of kilometres away in all-weather conditions. It will also help detect troop build-up in territories around us.

The AWACS project is a tripartite contract between India, Israel and Russia. The $1.1 billion deal for the three AWACS was signed in 2004. The first AWACS arrived in May 2009, when it landed at Jamnagar airbase in Gujarat, escorted by IAF fighters.

With the induction of AWACS, India has joined an elite club of six nations that include – US, Russia, Japan, Britain, Australia and Turkey, to operate such a sophisticated system. Pakistan, Greece and Brazil operate similar systems but of much lower capability.

According to a source, apart from the three confirmed orders, keeping the recent Chinese activities in mind, the IAF was keen to buy three more AWACS and the negotiations were in advanced stage.

Like the first AWACS, the second one will also be stationed at 50 squadron based at Agra Air Force Station, which happens to be one of the biggest and modern airbases in the country with an extended airfield and an avionics lab.

The IAF is in a major modernisation program to step up its strike capabilities. As part of its long term up gradation blueprint, the IAF is looking to acquire 197 Light Utility Helicopter from the international market and another 187 is to be developed by HAL along with a foreign partner, which is yet to be finalised. In addition to this, the IAF has projected a requirement of another 350 Medium- Lift Helicopters. Apart from this the multibillion dollar deal for 126MMRCA is also in progress. The IAF is also set to receive six C- 130J aircraft from the United States, the deliveries for which will commence in 2011. It is also mulling to buy 10 C-17 Globemaster heavy-lift transport aircraft from the U.S., through The Foreign Military Sales Route (FMS) and Request for Information (RFI) for the same has already been sent

Posted by Unknown at 8:58 PM No comments:

Brahmos Missile to Be Inducted Into Air Force in 2012 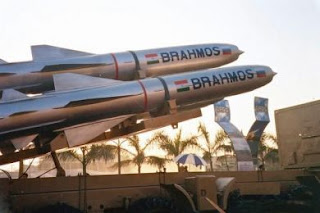 The country's prestigious 'BrahMos' missile would be inducted into the Air Force in 2012 that would ensure all the three wings of the military are equipped with the supersonic cruise missile, a top Defence official said today. "We have developed the airborne missile part, and process of integrating it with the Aircraft 'Sukhoi' was progressing', BrahMos Aerospace Ltd CMD A Shivathanu Pillai told the news agency at the BrahMos Aerospace's facility in Thiruvananthapuram.

Trial run of Airborne BrahMos missile would be held next year and the target was to integrate it with the Aircraft in 2012, he said. As far as integration of the missile was concerned, the original designers of the aircraft were also involved, he said. "We are working with them (Sukhoi). Some changes are necessary and once the alteration is identified, we will introduce the same in the aircraft," Pillai said. With that, all the three wings of Indian military -Air Force, Navy and Army would have the supersonic missile 'BrahMos', he said. Development of a new version of BrahMos missile, involving a technology that would discriminate the target and attack, in 2009 was a major achievement, he added. Three flights on the new version had proved successful and the army would be inducting two more of this version shortly, Pillai said.

On the next generation cruise missile, he said hypersonic BrahMos missile was in design stage. BrahMos Aerospace Thiruvananthapuram Ltd (BATL) was involved in developing eight sub-systems for the Defence and Indian Space Research Organisation (ISRO). On expansion of BATL, Pillai said the plan was to establish an "assembly plan" within a year by acquiring 27 acres now occupied by Air Force close to BATL facility. The state government had agreed to find alternative site for Air Force. Once the full-fledged missile integration unit was established, the facility would be capable of producing 25 BrahMos missiles per year from Thiruvananthapuram, Pillai said. However, he said that in the available facility an inspection bay would start from next month.

Referring to BATL's order book, he said ISRO had placed orders for products worth Rs 100 crore for its GSLV, PSLV and other missions. Defence Research Development Organisation has also placed orders for many of their components and "we are expecting more items from DRDO," he said. The company manufactures hardware, particularly for the 'Saruya' and 'Astra missiles, he said. Former President APJ Abdul Kalam visited BATL on Tuesday and asked the management to diversify into civil areas as lot of opportunities were in store in critical sectors such as nuclear power and solar energy.

Posted by Unknown at 2:59 AM No comments: 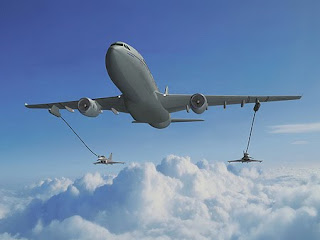 In a setback to Indian Air Force's (IAF) plans to expand its capabilities, the Defence Ministry has cancelled a tender worth around Rs 6,000 crore for procuring six air-to-air refuelling aircraft.
The contract was cancelled after the Finance Ministry had raised objections over the price of the aircraft recommended and chosen by the IAF after an over two-year-long process, Defence Ministry sources said.
The IAF had recommended the government to buy the Airbus A330 multirole transport tanker aircraft as it believed that the European aircraft was technologically more capable than the Russian IL-78 aircraft in the fray, they added.
The price quoted by Airbus for its aircraft was more than what the Russians were asking and as per the Defence Procurement procedure (DPP) norms, the government must buy the cheapest item that satisfies the qualitative requirements of the forces.
Airbus and Ilyushin were the only two contenders in the race. The IAF already has a fleet of six mid-air refuellers, which are based in Agra and are used for increasing the endurance of its fighter aircraft.
Four years ago, the Defence Ministry had sent request for proposal to American Lockheed Martin, Boeing, European EADS and Russian Ilyushin. Lockheed Martin and Boeing did not respond to the tender.
Posted by Unknown at 11:17 PM No comments:

The Confederation of Indian Industry (CII) has found that the major stakeholders in defence procurement place a lot of importance on offsets, the latter viewed increasingly as an important means of increasing the production of defence equipment in India.

In a recent survey conducted by the CII, the key findings included the fact that with India as one of the largest importers of defence-related products, offsets would leverage purchasing power and build up the homespun defence industrial base.

The Indian defence offsets policy was formulated in 2005 as part of the Defence Procurement Policy and was revised twice thereafter.

It is estimated that offset contract worth Rs 40,000 Crore would be signed till the year 2012. According to the latest estimates, between 2006 and 2008, offsets contracts worth Rs 8000 crores have been signed, of which 94% are in the aero systems segment and 6% in land systems.

The offset clause is applicable for procurement proposals where indicative cost is Rs.300 crores or more and the schemes are categorized as, ‘Buy (Global)’ involving outright purchase from foreign/Indian vendors, and ‘Buy and Make with Transfer of Technology’, i.e. purchase from foreign vendors followed by licensed production.

The procurement of defence equipment is made by the government from various indigenous as well as foreign sources to meet the requirements of the Armed Forces. The import option is exercised when it is necessary to procure the items within a definite time frame to bridge the capability gaps, and when such equipment cannot be sourced indigenously in a given time.

Implementation of the offsets is expected to result in expanding and enhancing the manufacturing infrastructure and technical knowledge for weapon systems required by the Armed Forces. The benefits of offsets accrue to both Defence Public Sector Undertakings (DPSUs) as well as to private Indian industry engaged in the manufacture of defence systems and equipments.

The survey reveals that industry’s participation in the offsets programme has been spread across the DPSUs and OFBs, the private sector and the medium and small enterprises (MSMEs).

The survey also highlights the sector-wise distribution of offsets contracts. The manufacturing sector accounts for the lion’s share of the offsets with 35%, followed by infrastructure with 23% share. Further, while the engineering and software sectors have a share of 15% each, the simulator segment accounts for 12%.

Posted by Unknown at 2:10 AM No comments: 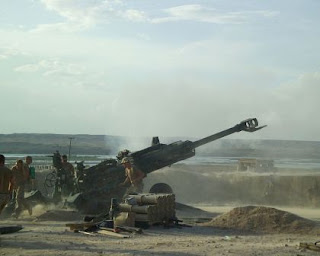 The Ministry of Defence is considering the purchase of ultra-light howitzers from the United States for the Army, to rush the pending artillery modernisation plan. The Indian Army has not added a new gun in more than two decades, diminishing its fire power.Defence sources said the government was looking to purchase these guns through the foreign military sales route, a US government procedure for fast track arms deals.

Even as US secretary for defence Robert Gates is expected to visit India later this month, New Delhi is now actively exploring the option of importing 145 air-mobile ultra-light howitzers (ULHs) for around Rs 2,900 crore from Washington in a direct government-to-government deal. The Army is looking to howitzers for deployment in the mountainous regions from Jammu and Kashmir to the North East.

This comes in the backdrop of the Army getting desperate to kickstart its long-delayed Rs 20,000 crore artillery modernisation programme, with the acquisition of different types of 155mm/52-calibre guns still stuck in different stages due to scandals.

Army needs the ultra-light howitzers to ensure that artillery can be swiftly deployed in forward, inaccessible areas with the help of helicopters. In fact, the two new mountain divisions being raised primarily for the eastern front with China, with around 15,000 soldiers each, are also to be equipped with ULHs.

Consequently, the direct foreign military sales (FMS) route with US government is now "also being progressed" for the BAE Land Systems' M-777A1 ultra-light howitzers. The MoD has been on a spending spree, signing 465 contracts in the last three years between 2007 and 2009 worth Rs 135,000 crore. The ministry hopes to exhaust its entire budget of Rs 41,000 crore for acquisitions this year.

The last few years have seen some big ticket purchases, from Phalcon Airborne Warning and Control Systems to Sukhoi 30 MKI fighter aircraft, missiles and long range maritime reconnaissance aircraft - the Boeing P-8I.The MoD is expected to finalise some big deals in the next few months, including the 126 multirole fighter aircrafts. The government has used the fast track route to buy military platform from the US in the past.
Posted by Unknown at 9:55 PM No comments: